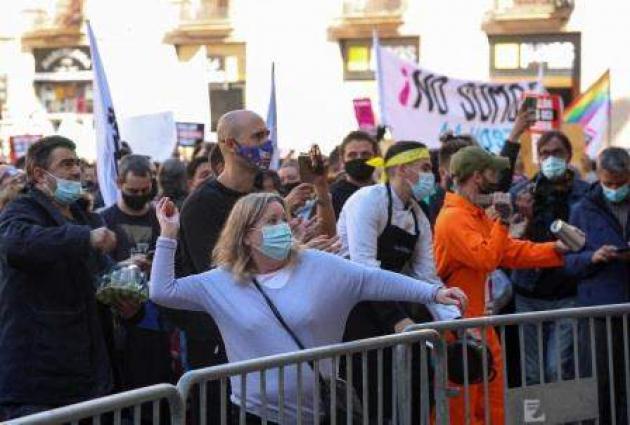 MADRID (UrduPoint News / Sputnik – 16th October, 2020) Owners and workers of food businesses in Barcelona took to the streets on Friday to protest against the reinstated closures and restrictive measures introduced by the authorities amid a resurgence in COVID-19 cases.

Earlier in the day, Spain‘s Catalonia northeastern autonomous region, of which Barcelona is a capital, enacted a whole set of new coronavirus-related restrictions, and pledged a new financial support package to mitigate decline in the hospitality sector.

Food outlets, in particular, will only be allowed to cater for “take away” orders or delivery.

Spanish broadcaster 24 Horas has reported that business owners and workers gathered in front of the government building at the Placa de Sant Jaume square, with some protesters throwing objects at the building and police.

In a video footage published by the Elperiodico daily, some of the protesters were banging kitchen utensils and came dressed in their work uniforms.

Protesters held placards which read “We are not the problem. The hospitality sector is safe,” and “We do not need charity, we just want to work.”

Other restrictions that became effective in Catalonia today include malls being responsible to reduce the number of visitors to 30 percent of their total capacity and theaters and movie theaters to 50 percent. All sporting events and in-person classes at higher educational institutions were temporarily canceled. Public assembly was limited to groups of six.

The new measures are going to remain in effect for at least 15 days.

Spain is combating Europe‘s second-worst coronavirus outbreak after Russia, with more than 920,000 COVID-19 cases confirmed as of Friday. In just the past two weeks alone, almost 127,000 new cases were detected in Spain, with Catalonia accounting for over 20,000 of the cases.