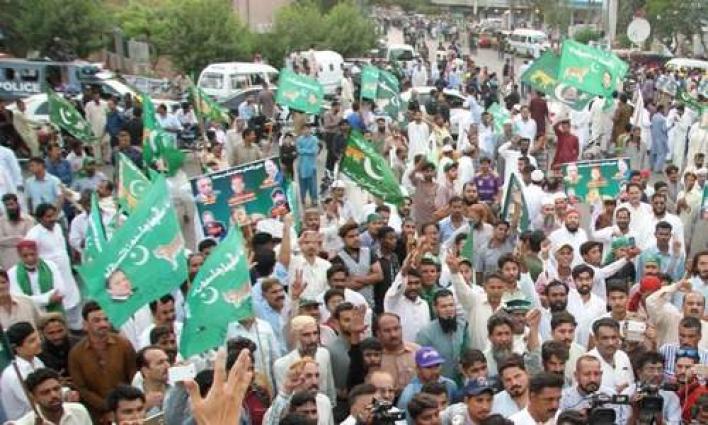 The party leaders say the time has come when the “selected Prime Minister” should go home, vowing that they will continue their struggle against the incumbent PTI government.

The PML-N leaders and large number of workers are in the rally at Mall road’s Regal Chowk. PML-N leaders addressed the workers and strongly criticized the PTI government.

“Opposition has been pushed to the wall, said Khawaja Saad Rafique while addressing the participants of the rally. He said fake cases were registered against them.

“You damaged the state by making fake cases,” he further said.

The rally is being organized at this moment when JUI-F Chief Maulana Fazl ur Rehman has been made as head of Pakistan Democratic Movement (PDM)—a movement that was decided by All Parties Conference to get rid of PTI government.

“We are with Shehbaz Sharif and today’s rally is against his arrest,” said the former Punjab Law Minister. He said the current government just took revenge from the opponents.

“What they found in the previous cases made against Shehbaz Sharif,” he added.

The PML-N workers were charged on the occasion.

Opinion: Why the Senate must confirm Biden’s Homeland Security pick