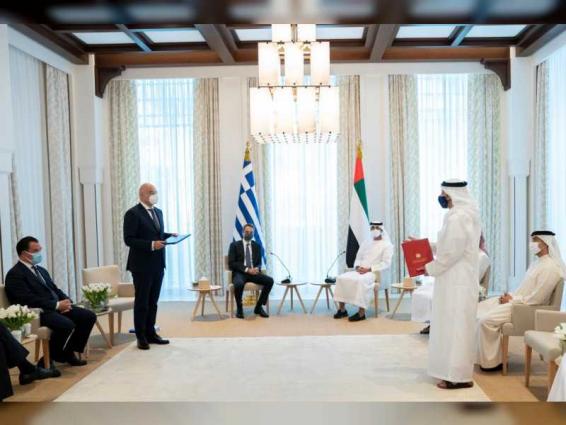 ABU DHABI, (UrduPoint / Pakistan Point News / WAM – 18th Nov, 2020) His Highness Sheikh Mohamed bin Zayed Al Nahyan, Crown Prince of Abu Dhabi and Deputy Supreme Commander of the UAE Armed Forces, and Kyriakos Mitsotakis, Prime Minister of Greece, attended the announcement of the establishment of a strategic partnership between the UAE and Greece, in addition to the signing of a Memorandum of Understanding, MoU, in the field of foreign and defence policies.

The announcement aims to achieve further outcomes, launch new initiatives, and encourage joint action between the two countries in areas of mutual concern.

In the statement, the governments of the two countries stressed their commitment to international law, the United Nations Charter, and principles related to peace, good neighbourliness, and the peaceful settlement of disputes by all countries in the region.

The announcement noted that the “Abraham Accord Peace Agreement” signed by the UAE and Israel to normalise their ties is a historic achievement that will help establish peace, stability and mutual understanding between the peoples of the middle East.

The two countries also affirmed their commitment to not interfere in the internal affairs of other countries and highlighted the importance of coordinated action by the international community to combat ongoing regional interventions and support the sovereignty of countries.

The announcement then underscored their concerns about terrorism and extremism in the region and the exploitation of conditions in areas of conflicts while stressing their mutual commitment to combatting terrorism and extremism, and urging the international community to take resolute action against such attacks.

The two governments agreed to enlarge the scope of their cooperation with regional and multilateral entities, agreeing on the added value of this cooperation.

Greece expressed its commitment to playing a key role in reinforcing the historic ties between the UAE and the European Union, EU.

The comprehensive partnership between the UAE and Greece includes and is not limited to the following areas: Political Cooperation and International Humanitarian Development: The UAE and Greece agreed to strengthen their political discourse, strategic consultations, and convergence in regional and international issues of mutual concern. The two governments also agreed to cooperate in international humanitarian projects, development initiatives and multilateral events.

Trade, Investment and Tourism: The two governments agreed to advance their economic relations to consolidate their trade, investment and tourism ties, as well as facilitate the exchange of information and expertise in investment-related areas, support small- and medium-sized enterprises, SME, and entrepreneurs, develop business networks that encourage cooperation, such commercial businesses incubators, reinforce their capacity building and promote entrepreneurship in both countries.

Culture: Under the framework of exchanging mutual knowledge and understanding their cultural heritage, the two governments will enhance their cooperation in cultural and creative industries, with an emphasis on architecture, design, performing arts, fine arts, film, literature, publishing, museums and cultural foundations.

Energy: The two governments will reinforce their partnership in the energy sector, including in petrochemicals and clean and sustainable energy, as well as exchange relevant knowledge, skills and technical expertise.

Food and Agriculture: The two countries will consolidate their cooperation in food, agriculture and fisheries, as well as promote related projects and partnerships.

Business exec and his wife charged after flying into remote Canadian town to get Covid-19 vaccine, officials say